I got to take a break from historical for the past week and a half because I have the coolest job ever. We at Custom Wig Company are working hard (and succeeding!) at expanding our cosplay market, which is thrilling, because it makes my job even cooler to be able to create pieces based on some of my favorite characters. Our cosplay roster has really exploded this year as we slowly prove to people that yes, our pieces really are worth the money. Why spend all that time and effort crafting an exquisite costume just to cheapen the look by topping it off with a clunky plastic wig that doesn’t fit?

Part of this means that we are attending several cons this year. What I’m saying is: I have to cosplay for my job. No big deal or anything. We’ve decided to start out with a group Harry Potter cosplay. Basically we’re getting paid to dress up as Harry Potter characters and hang out at cons (and sell wigs, obviously). And I get to be one of my favorite characters…Luna Lovegood! So a few weeks ago I constructed my wig, and this past week and a half I’ve been working on this dress:

I landed on this one because 1) It won’t be as hot as some of her other costumes, 2) It involved one piece that I could make, instead of a bunch of pieces that I might have to try and find, and 3) I love yellow. 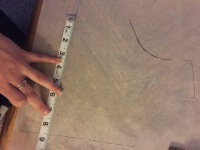 I adapted the bodice pattern from the one for my Regency dress (that thing sure comes in handy) after spending thirty seconds looking for a modern Empire dress pattern that I liked (there were none that came even close). I had to bring up the neckline, and drop the waist and move things around a bit to make up for the fact that I’ll be wearing a bra, not stays. 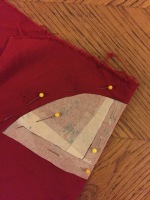 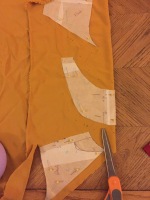 Once I had the mockup/lining the way I wanted it, I had to go through the terrifying ordeal of cutting the pattern up into pieces to make the colorblocked sun on the front of the dress. I double checked so many times to make sure I’d added seam allowance in all the right places.

And I did! Thank goodness it worked the first time, because I definitely didn’t have enough fabric to do it over again. 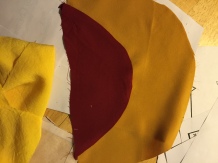 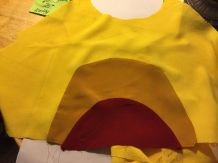 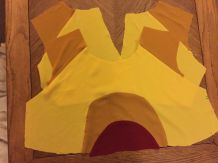 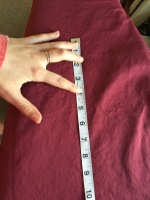 Unsurprisingly, I miscalculated how much fabric I would need for all those ruffles, so I didn’t have enough to make the skirt base out of the main fabric. Instead, I used some maroon broadcloth that I had lying around. This was probably for the best, since that rayon has a bit of stretch to it, and the broadcloth provided a much more stable backing. I very carefully measured and marked where each ruffle would go, because I had really limited amounts of fabric, and had to get the number and width of the ruffles right first time, or start all over again with a new fabric order. Then I set in to hem and attach all of those ruffles… Since this was Luna Lovegood, that could mean only one thing–time to watch Harry Potter!!!

I attached each ruffle as I went along, since I can only do hem stitch for so long before my left hand is in agony.

It took three Harry Potter movies to hem, gather, and attach all of those ruffles, including the one that goes around the neckline. As long as I was doing all that gathering, might as well gather the bodice and skirt into that skinny little red waistband too. The dress is just pinned to the front of the dress form in the picture, because I couldn’t get it over her shoulders. Don’t worry, it fits me! 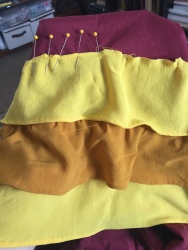 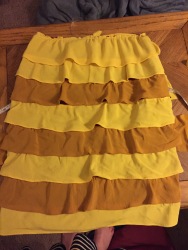 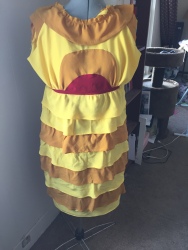 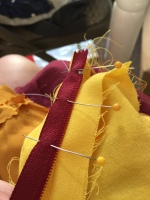 Putting in zippers is about my least favorite thing to do, but I beat this one into submission! I spent Harry Potter and the Goblet of Fire stitching the lining in, and making that funny little decoration with the hanging cords, and voilà! 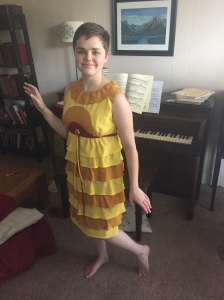 It’s not perfect, but I think it’s a pretty good attempt, and all my complaints are pretty nit-picky. I can’t wait to see what it looks like combined with wig, shoes, wand and radish earrings! My boss’s husband is a photographer, and once I have all the accessories, we’ll do some real studio photos.

Until then, beware of Nargles!

Edit: Here’s a photo of me in the full getup. The wig (of course) is by Custom Wig Company. The wand is from Wizard Wands Emporium, and the earrings are from Fantastical Fun Shop, both of which are on Etsy. The gorgeous photo is by Benjamin Marcum Photography, who is an incredible portrait and headshot photographer, who also does all of the cosplay shoots for CWC. The eyebrows, unfortunately in this case, are all mine, and refuse to be covered no matter what trick I used. The only thing I have left in my idea bank is blonde mascara, but I keep forgetting to pick some up. 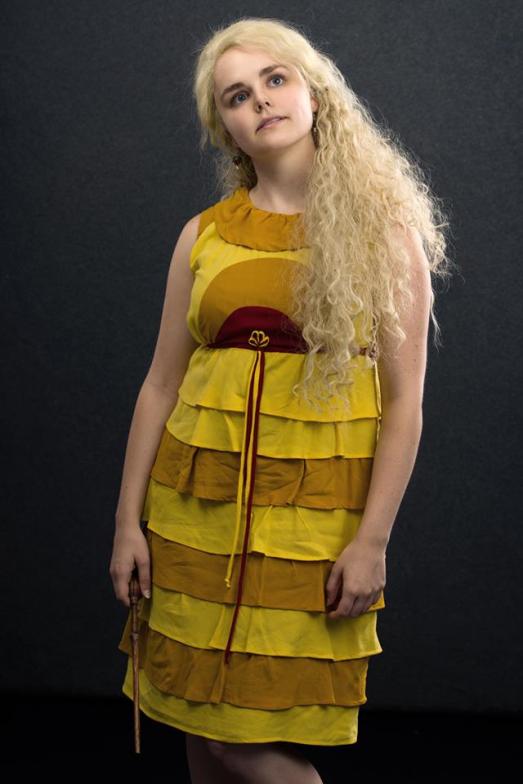