A Dress of My Own

We made it! After months of craziness, the wedding is over and perhaps things will return to some semblance of normalcy. (A likely story).

We couldn’t have asked for a more perfect day (both the weather and the event). We are so lucky in our friends and family. Nearly everything at the wedding was done by someone close to us: the food, the music, the cake, the drinks, the decor, the flowers. Never before have I been so grateful to be surrounded by all of the wonderful people that I love.

But of course, there was another handmade element to the day, and that’s what I’ve been promising you all that I would write about for many months now: my dress.

The dress was really built from the ground up: I planned, sketched, draped, sewed, and embellished it over the past several months. I was inspired by images of bridal gowns both vintage and modern with a vintage feel. I especially love some Chanel wedding gowns from the 1930s.

We got married on my parent’s acreage in northern Michigan, in one of their fields, so I wanted something that had that vintage feel, and worked with the rural setting. I went for a body-skimming fit-and-flare style embellished with lace. I knew from the start that I didn’t want a strapless gown, since I didn’t want to have to worry about it slipping down all night, especially with the added risk of tripping over a loose clump of grass. With that in mind, I designed a sweetheart neckline which has lace overlaid on top to make a v-neck with straps. The lace then flows down the gown and opens up into larger lacy godets in the skirt. I wanted all of the lace to have a very organic feel, as if it was growing over the gown.

Making a careful mock-up before I began was very important: if you want any dress in the world to fit your perfectly, it’s your wedding dress. I draped the gown on my dress form, knowing that I would have to tweak it a bit once it was on my body, since the dress form’s shoulders and underbust are a bit larger than mine. But she was a good place to start getting the shapes down.

I knew I didn’t want a waist seam, so the dress is made up of seven long, thin pieces: one in the front, two side fronts, two side backs, and two back pieces. Right around my knees, the seams open up, and I inserted a triangular piece called a godet in order to give the bottom of the skirt extra volume. I was bad about taking pictures while patterning, so this one is after the mock-up was sewn, and I had already made some adjustments.

My friend Amy came over to help fit the mock-up. I’ve never been a freak-out-about-weddings kind of person, and I was shocked how exciting just putting on the mock-up was.  We were both shrieking with glee. It was just muslin with giant seam allowances and blue marker notes written all over it, but I felt stupidly pretty. It’s always a toss-up when you’re trying out a new silhouette. I might have put on that fit-and-flare and hated it, but I was thrilled.

Once I was certain I had the fit how I wanted it, I tore out the seams in the mock-up and set about turning them into useful pattern pieces. This mostly involved evening out the hemline, confirming where the grain lines needed to fall, and truing up the seam allowances. 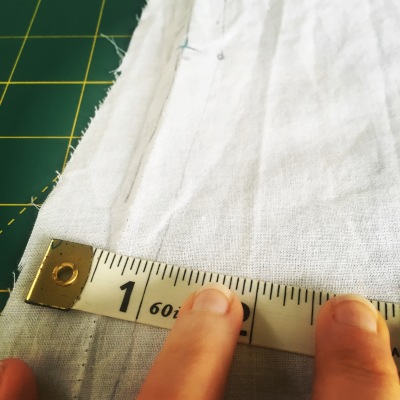 The mock-up had enormous seam allowances, because I always leave plenty of extra to allow for adjustments. Truing up the allowances is the tedious progress of measuring out the actual seam allowance you plan to use and trimming off the excess. Normally I do this by eye (my carpenter dad would be so proud of me), but because it was so important to get the fit of this dress absolutely spot on, I actually measured it.

The silk is a very basic off white Habotai, which I happened to pick up at the Kalamazoo Living History Fair. Since there was going to be so much lace on it,  I was able to save a bit of money on the fabric. I love the more subtle sheen of Habotai as compared to satin, and the lightweight fabric was definitely a good idea for the late summer wedding and a night of dancing. 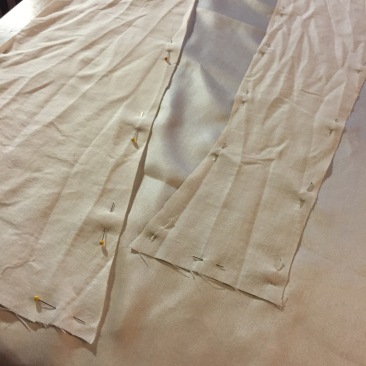 The construction of the dress itself is very simple. I flat-lined the silk with a lightweight linen to help keep things cool and to make the fabric easier to work with.

At this point, it didn’t look anything like the final product, but it was a dress, which was an enormous weight off my mind, I can tell you!

The upper edge is just finished with a narrow hem, and the seams are flat-felled. The nice thing about flat-lining, is that it means the lining can’t twist around inside the fabric, which makes the dress more comfortable to wear. The hem on this dress took for absolutely ever. I didn’t really comprehend how much volume the godets added to the skirt until I had to hem it all. Poor Miss Marionette hated the white dress because she wasn’t allowed to sit on my lap while I was working on it.

I ordered all of my lace from Mary Not Martha, a favorite seller of mine on Etsy. We met her last year at the Jane Austen Society convention, and she had such beautiful things that I knew I would be returning to her when it came time for the wedding dress.

This is actually just my first order of lace, I ran out and had to order more! There are two different point d’esprit tulles, an embroidered tulle lace, a long scalloped lace trim which didn’t end up fitting into the rest of the design, and piles and piles of Venice lace motifs.

The trickiest, and most important part of working with the lace was draping the straps. My friend and coworker Hannah helped me out with those. It was important to drape them on me because my dress form’s shoulders are so much wider than mine. The straps had to fit perfectly before I could work on anything else because once I started covering everything in Venice lace, it would be hard to make any adjustments. 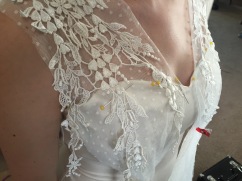 Hannah started with a piece of the softer point d’esprit. We left it very wide so that we had plenty to work with, pinned it to the dress, and then started marking where the straps should go, and pinning lace over until we found a configuration we liked. We were left with long strips hanging in the back and the front, and since I didn’t want anything on the dress to seem abrupt, I had to figure out the best way to marry it naturally with the rest of the embellishment. I gathered in the excess in front with clips and liked the way that created a nice ruching over my chest, but left the long dangling parts to deal with later. 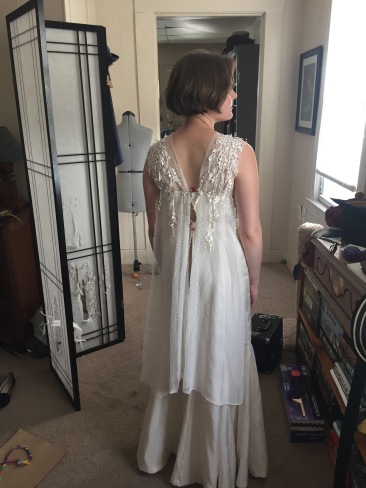 I feel like before I dealt with the volume from that dangling tulle, it looks a bit like an attractive maternity dress.

In the front, I dealt with the extra tulle by gathering it to a point just beneath the bust, trimming off the extra length, and covering the attachment point with lace. The lace down the seam is a piece of a motif like the three-armed ones that make up the strap. I cut nearly twenty of those motifs apart to get all of the pieces I needed. 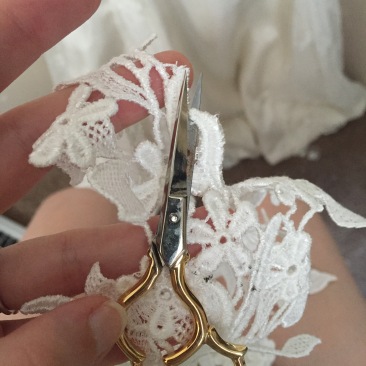 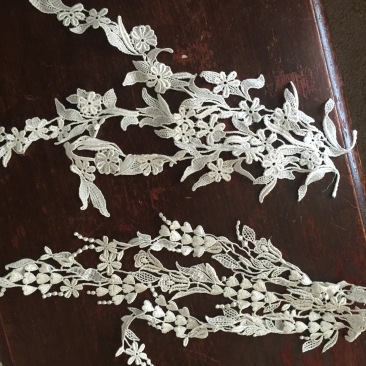 Each of the the godets has a rectangle of the embroidered tulle lace laid on top and gathered up into the point.

The lace “grows” from the straps, around the bodice and down the seams, then opens out to frame the embroidered tulle on the godets. 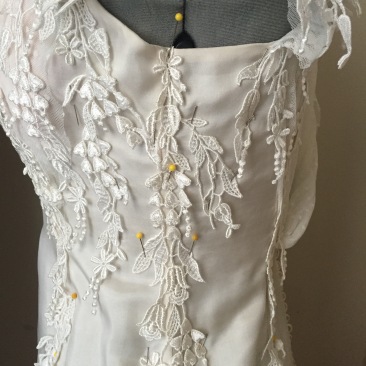 As I got around to putting lace down the back seams, I really did have to figure out what to do with the leftover tulle from the straps. In the end, I really liked the way it flowed behind me, but not the way it obscured the shape of the dress, so I gathered it in at the waist and left it in two fluttery tails from there. 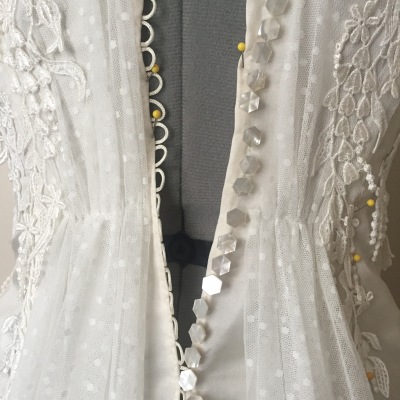 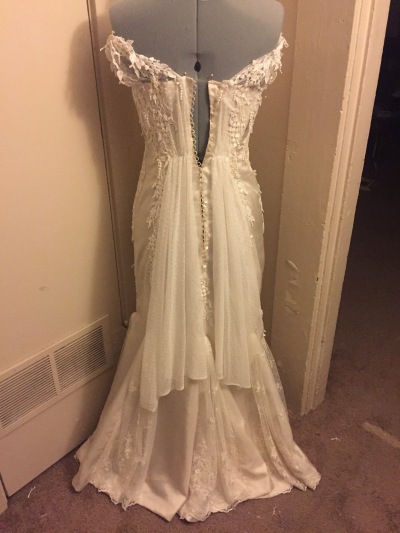 When the lace was on, I took another quick break from embellishing to make a little crinoline out of a stiffer point d’esprit and yellow tulle, so that the flare of the skirt would stand out just a bit more.

With the crinoline in, Hannah came over again to help me with another important step: getting the skirt to lift up for dancing. The flare was so wide that it was basically a skirt by itself, so we put a button at the point of each godet, and hid a loop in the lace around my hips. The whole flare then lifts up into a full skirt with a drop waist, and it is great for spinning (it goes out into a full circle, and the yellow tulle shows underneath)!

At this point, it was time to begin the final push: beading. I didn’t want to be encrusted, but I did want to pick out flowers here and there in the lace to give the dress an extra bit of dimension and sparkle. In the end, there are close to 1000 clear and gold seed beads on the dress, each applied by hand. 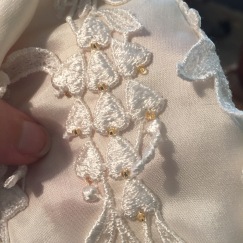 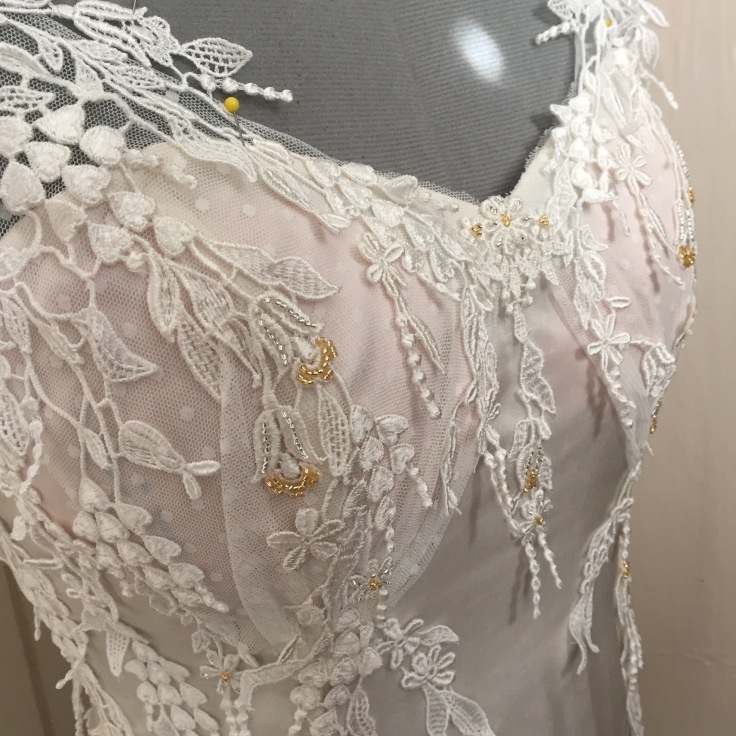 I put the final bead on the dress two days before the wedding, which I consider pretty darn good. (Handmade dresses run in the family: my Auntie Lois was still working on hers the night before!)

There are very few projects that turn out just like what you had in your head, and this was one of them. I couldn’t be more thrilled. It really was the perfect dress for the perfect day. 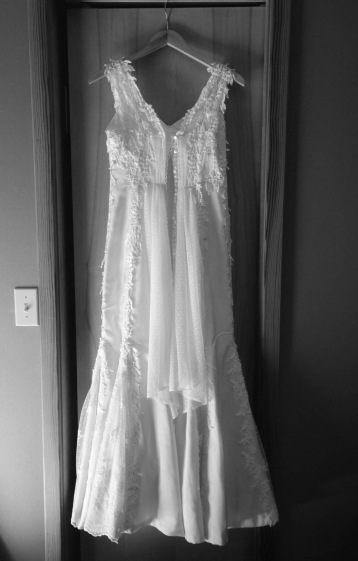 I hope you enjoyed! I will be posting another blog about the wedding itself next Monday, and then it’s back to your regularly scheduled programming of cosplay and historical dresses! I will be updating the blog every Monday morning, so keep an eye out!