There are a couple of new cosplays I’ve been hankering to make for a while now, and now that the wedding is over, I can finally begin.

First up is one I’ve been planning since I started cosplaying a year ago: Snow White from Once Upon a Time. As much as the show I once loved has become a show I love to hate, I do still love this character (probably because she’s one of the few who has retained her not-just-a-copy-of-the-Disney-character status), and while she has certainly had some fashion missteps (as has everyone on that show), by and large, she gets some pretty wonderful costumes. I’m embarking first on one of my favorites:

Since I have had multiple people stop me in grocery store lines and other random places to tell me I look like “that chick from Once Upon a Time,” it seemed like it was time to go for it.

Technically, work on this cosplay began back in April, when I made the wig: 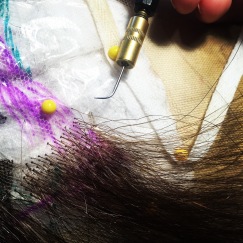 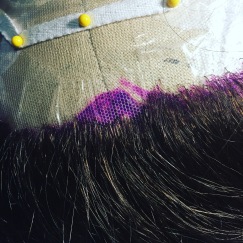 We got extra lucky on this wig, because a beautiful high-quality hair was on sale in exactly the right color at just the right time, so it’s extra soft and silky. The wig will soon get to be used for its intended purpose, but in the meantime it has still been busy–the length and silkiness of the hair makes it a perfect wig for the 1840s!

As with all costumes, I first sat down and did a lot of staring at pictures, watching scenes, and planning. This mostly involves asking lots and lots of minute questions.

And so on and so forth…

I don’t like to embark on a costume until I have the answers to at least most of my questions. I also like to know where all of my materials are coming from. I don’t want to get halfway through a project and suddenly realize that I can’t find the right fabric for one of the pieces, since that would put all the work I had done on hold until I found it.

The standout piece in this costume is, obviously, that jacket. I has so many stunning details! The beads on the sleeve attachments! The dramatic collar! The diamond pattern! The sparkly bit in the center of each diamond! I was very excited to get started.

After going back and forth many, many times, I decided to make the jacket out of cotton velveteen, and quilt the pattern into it.

While the velveteen was on its way, I started draping using a random scrap of upholstery fabric from my stash.

Next I draped the tabs at the bottom, but I don’t have pictures of that because I was busy live streaming it on my Facebook page! Head over there if you’d like to check out the process.

I draped the collar with canvas so that I could really see how the shaping at the points would look. The collar is all draped as a single piece, and has to blend in very gently to the front in order to create the correct shaping of the neckline.

The sleeves are just two very simple shapes that are held to the body of the jacket and onto each other with strings. I ran out of my original orange scraps and moved on to some green ones.

The fabric hadn’t yet arrived when I finished draping all of the pieces, so I moved on to drawing out the quilting pattern. I started by blowing up a high resolution photo until the front tab was the same width as the piece I draped, so that I had an idea of what size the diamonds needed to be.

I measured out each line and drew the pattern on a large piece of tracing paper so that I could transfer it to large areas of fabric without need it to move the pattern around too many times. 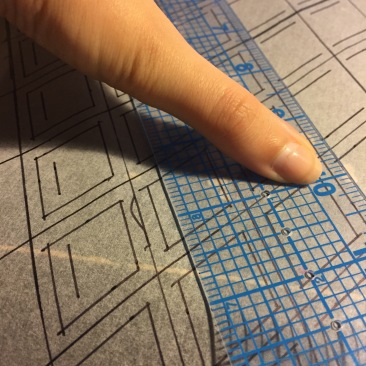 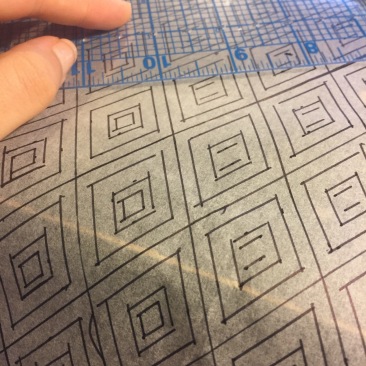 The velveteen arrived! I cut the pattern out in velveteen, batting, and muslin for lining, so that it gets nice and thick and squishy when quilted.

It took me a few tries to figure out the best system for quilting all those tiny shapes. I did all of the outer diamond lines first, since they can be stitched straight across the piece from edge to edge. The largest inner diamonds came next. Each one has to be stitched individually. It first I was just jumping from one to the next, leaving all of the thread ends where they were to be dealt with later, but it didn’t take me long to realize that that was going to be overwhelming when it came to it. I started pulling the thread ends from each diamond through to the back and trimming them as soon as I finished stitching. This made whole pieces much less cluttered and easier to work with.

The next size of diamond was done in exactly the same way.

The final small diamond and the horizontal lines that flatten down part of the diamond pattern will have to be done by hand. There are too few stitches in each of those lines to make it worth starting and stopping the machine and deal with the thread ends every time. By hand, I can stitch the lines, the diamond, and the central bead with a single thread.

I had better get back to quilting! I had originally hoped to have this costume done for our annual Halloween party, but all this quilting is making that look like a crazy idea! Unsurprisingly, it turns out I’m nuts and set myself crazy tasks. I’ll see you next week with more updates!

9 thoughts on “Snow White Riding Outfit 1: What did I get myself into?”