When anyone asks “what is your dream project?” I can’t answer because of all the bustle dresses battling in my mind. There is something about the more-is-absolutely-more level of detail, and the unique silhouettes that gets my creative juices flowing. This dress started as an idea that we were batting around at work several years ago: Hogwarts themed bustle dresses! Hogwarts houses are a fun bit of inspiration because they are associated with three different things: a color scheme, an animal, and a personality type. Now, if you’re going to design a Hogwarts house themed dress, you obviously have to start with your own house. In my case: Ravenclaw, hands-down. So for Ravenclaw, that means:

Color scheme: Blue and Bronze (yes it was blue and silver in the movies, don’t get me started)

It was fun to imagine a muggle-born Ravenclaw witch paying calls to her muggle family while sporting her house colors. I’d imagine Victorian witches pioneered the idea of hiding wands inside of umbrellas.

I started by digging through photographs of extant dresses from the early 1870s for ideas of ways to use color, and for bird and feather-like details.

Those tiny knife pleats around the neck are wonderfully feathery, but the real kicker here are the wing-like foldbacks of the overskirt front. I knew I wanted an overskirt, but there was something about the apron-y look of many of them that just didn’t stand out to me for this dress. The overskirt here was a breakthrough for me.

This dress gave me the perfect swallow-tail back to go with my winged overskirt!

I love the amount of contrast bias edging on these ruffles! This photo also shows just the silhouette I’m going for.

I love the skirt trim on this–knife pleats on the bottom, scallop-y shapes on top, with what seems to be a velvet ribbon in-between.

I’m having trouble finding the exact documentation on this dress, but the shapes look right for the time period, and that feather-y trim everywhere was too good to resist looking at!

I also looked at lots of fashion plates in books like this one:

And I’ve been absolutely loving the book Embellishments: Constructing Victorian Detail, which not only has wonderful detail shots of extant gowns, but also teaches you how to create some of the most common yourself! Unfortunately, it seems to have gone out of print, but you can find used copies around. Edit–the author has since let me know that a few more copies of the book will be available when they come back from an exhibition at the end of August! Keep an eye out for them here.

After putting all of this information into my brain, and stirring it around, this is the design I came up with:

I wanted to keep the bodice plain–a bit uptight and schoolmarm-y, and then make the skirt magical and bird-like.

It will be made in Midnight Blue and Cocoa Brown Silk Taffetas with Navy Cotton Velveteen details. All of the fabrics come from Renaissance Fabrics.

I’m currently working on bringing the underskirt into being, and in the meantime you can read all about the making of my Victorian understructure: 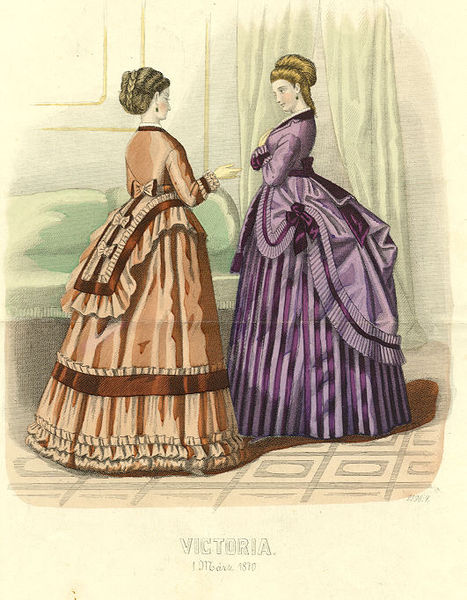