If you read this blog, you’ve probably noticed that I’m a bit of a geek. You’ve seen me build Harry Potter cosplays, Game of Thrones cosplays, Once Upon a Time cosplays. You’ve heard me geek out about the wonders of historical garment construction techniques, and apply both sides of that geekery to the beginnings of a Hogwarts-themed 1870s bustle gown.

Well, I’m doing it again. No kind of costume makes me happier than when I get to combine my love of historical costume with the fun of cosplay, and I am now working on another one of these ultimate mash-ups. More than that, it’s a character from my all-time favorite fandom: Terry Pratchett’s Discworld.

The first four days of September this year will be the North American Discworld Convention in New Orleans–since that Sunday will be our first wedding anniversary, Brandon and I are splurging on a trip to celebrate our favorite fantasy world. Of course a big part of this venture is the costumes! We will be dressing as two of our favorite characters: Moist Von Lipwig and Adora Belle Dearheart.

Brandon’s golden suit will be coming along shortly, but today I’m here to talk about Adora Belle. Miss Dearheart was played to snarky perfection by Claire Foy in the 2010 adaption. 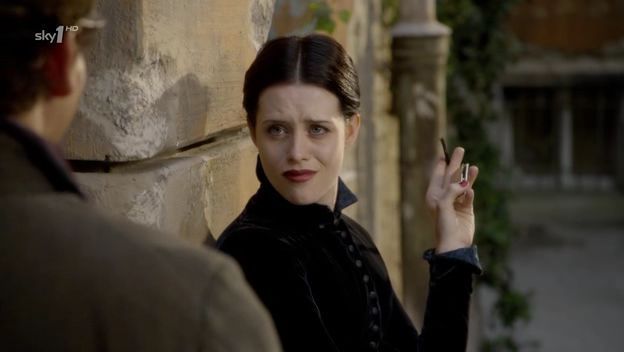 But while I absolutely adore this movie, I didn’t actually want to use their Adora Belle design. With Discworld, I’d rather work straight from the source.

Like all of the Discworld books, Going Postal is a brilliant piece of satire: engaging, thought-provoking, and hysterically funny. It features the adventures of Moist Von Lipwig, the unfortunately-named con-man-turned-postmaster-general, after the ruler of the disc’s largest city, Ankh-Morpork, resurrects him from the noose in order to revive the collapsed and out-of-date postal service. Just as Lord Vetinari suspected, Moist’s endless bag of huxter’s tricks and boundless charisma are just the shock the system needed, but it turns out there’s much more to reviving the post office than delivering some letters, and Moist is soon at war with some deadly competition.

Adora Belle Dearheart (a name that will surgically remove any woman’s sense of humor), is Moist’s sardonic love interest. The daughter of the inventor of the clacks system (a telegraph-ish method of communication using towers mounted with semaphore arms or, later, light boxes that flash a coded grid), Adora Belle has even more of a bone to pick with the post office’s main competition than Moist does. The current owners of the clacks swindled her family out of their property and worse.

Terry Pratchett’s character descriptions tend to be short, but vivid. In Going Postal, Adora Belle is described as having “coal black hair plastered down and forced into a tight bun at the back, so that she looked like a peg doll.” Her clothing is very consistent. Unlike in the movie, where she wears black velvet, the Adora Belle of the books always wears grey. Moist comments in Raising Steam (the third book to feature these characters) “She had bought a most attractive and therefore expensive gown for the evening. It was still grey, of course, but with a kind of luster to it that made it seem almost festive” (Emphasis mine). In her first appearance in Going Postal, she wears a “tight, grey, woolen dress,” prompting Moist to realize “how well some women could look in a severely plain dress”. Which brings us to one of the most illuminating descriptions of Adora Belle’s general appearance. This one is from the second book about Moist and Adora Belle, Making Money, “The heels helped, of course, but Spike [Adora Belle] could move like a snake trying to sashay, and the severe, tight, and ostensibly modest dresses she wore left everything to the imagination, which is much more inflammatory than leaving nothing. Speculation is always more interesting than facts.”

Here ends the scholarly portion of this post, so let’s get to the actual design I went with. The “industrial revolution” period on the Disc is generally depicted with a late 19th century aesthetic. But, of course there are lots of different looks to choose from in the late 19th century. Sir Terry does give us one clue though. Earlier in Going Postal, Moist observes that “Bustles were back in fashion in the city for some inexplicable reason.” And if we follow Roundworld fashion history, that one sentence narrows us down to one period of less than ten years. It can’t be the 1870s, because bustles have already been in fashion at least once, so it must be somewhere in the second bustle period, about 1883-1890.  I couldn’t really see Adora Belle in the full-on centaur bustles of the mid-1880s, so I decided to focus my research right around 1889-90, when most would still have been wearing bustles, but the more fashion-forward were beginning to deflate their rears into the sweeping A-line shape of the 1890s. It was perfect: I could keep the narrow, severe front of an 1880s gown, but lose the massive bustle for a more graceful volume supported only by a small bum pad to give my backside a bit of extra oomph.

Once I had that image in my head, I knew when to focus my research:

But it wasn’t until I found this gown, that everything really came together:

It was perfect! The sleek silhouette, the slinky train, the power shoulders. I loved that it was one piece, instead of a bodice and skirt–I didn’t want to break up the line of the dress. Without the embellishment, it was everything the books describe–tight, plain, severe, but still unbelievably sexy. I couldn’t have asked for a better piece of inspiration.

I was slightly tripped up about the mysterious closure–the only hint to it is a slight rippling on the left-hand side. Luckily, Janet Arnold breaks down a jacket that closes the same way in Patterns of Fashion 2. The dress is from the Fashion Museum in Bath.

It gave me a couple more little details that I think are perfect for Adora Belle. I like the idea of having her dress be very plain from afar, and then, as you get closer, little details start to jump out. This dress, instead of closing with invisible hook and eyes, has a row of little buttons along the shoulder and down the side–what could be more severe yet scintillating? It also has a little row of feathered embroidery along each dart to hold the extra fabric still. In tone-on-tone, this will be invisible until someone is standing near it, but give a nice bit of depth to an otherwise plain ensemble.

The Janet Arnold pattern was a godsend. I was able to use the jacket as a jumping-off point to draft the pattern for the full dress.

I sewed the grid interfacing into a mockup I could try on, and made further adjustments from there, but I didn’t take any photos of that fitting.

After much searching, a picked out a charcoal grey linen/wool twill from Fashion Fabrics Club. It took me a long time to find a fabric I was happy with, because I wanted as dark a grey as I could find, and I wanted it to have some texture to it–twill, herringbone, pinstripe, anything to add a bit of depth. I was very pleased to find the linen/wool blend because it looks and feels like wool, but will hopefully breathe as much as possible in the New Orleans heat.

The pieces are flat-lined with a plain red cotton, which helps support the twill. I didn’t line the skirt portion of the center back, though, because I wanted it to keep its fluid drape. 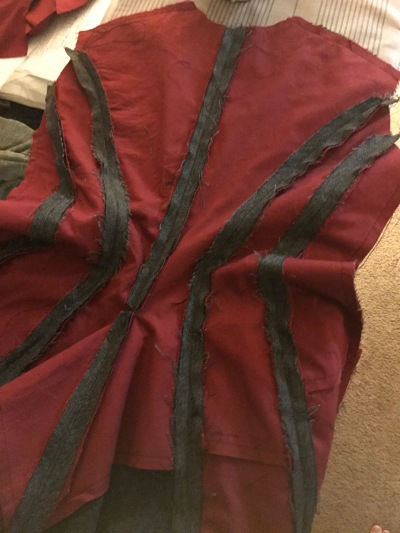 Testing out the drape on the back.

The front lining is done in two pieces, with a piece of hook and eye tape between them. This will attach to an overlapping lining from the other side to help keep everything in place.

There are two darts on either side of the front to help it shape around my waist. These will be accented with tone-on-tone embroidery later. 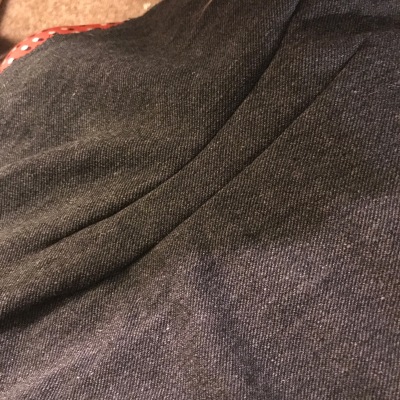 This is the ‘underlap’ for lack of a better word. It is a glorified piece of lining that gives the left sleeve and collar something to attach to when the dress is open, and is hidden by the front piece when the dress is closed. It is made of lining material, with a facing of the grey twill only where it is possible that it will peek out from behind the actual front.

Once the underlap was attached, we did a quick fitting, and I had to adjust the waist and darts a bit.

Conveniently, I had some vintage seam binding sitting around in my stash. I used it to finish the raw, open left side of the skirt. It will give some nice stability where the buttons are attached.

A piece of twill tape around the inside waistline of the gown helps support the fabric. The waist will be taking strain both because it is so tight, and because of the weight of the skirt, so it needs all the help it can get from the inflexible twill tape. 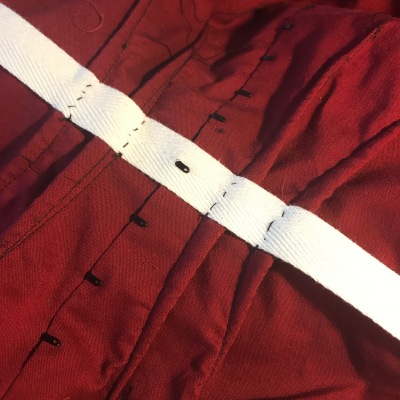 And then it was time for another fitting–this time to check my adjustments were right, test the placement of the closure, pin up the hem, and test a collar.

I’ll be back soon with sleeves, buttons, and other embellishments!