Pant…pant…pant… It’s here! It has been six months since my last post about the Ravenclaw bustle gown due to more time-sensitive projects barging their way to the front of the line! When last we met here in Ravenclaw-land, I had just finished the underskirt, but that wasn’t the only thing going on the bottom half. Here we have…(drumroll)…the overskirt!

In the true spirit of bustle-era excess, I ask: why have only one skirt encrusted in intricate detail when you could have TWO?!

I started the overskirt by mocking it up in some very fun harlequin print quilting fabric that I had sitting around.

The mock-up was draped right on the dressform, just moving bits around and bunching things up until I was happy with how things looked. 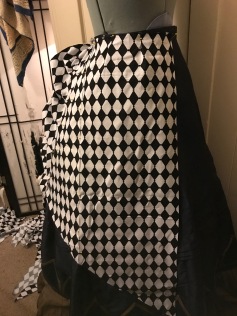 In order to give myself a solid base on which to gather the polonaise (the puffed-up portion) at the back, I made an extra organdy lining to go inside the back. 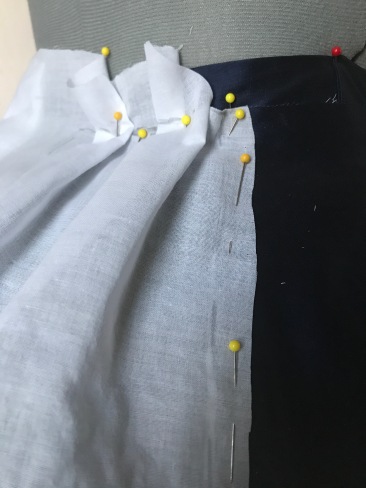 The back piece is pleated into the side seams in order to give extra volume to the polonaise (the puffy portion) at the back.

I got the base of the skirt done pretty fast… 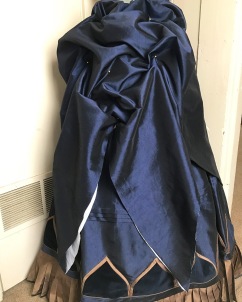 …and then had this thought that kept bugging me in the back of my brain. Wouldn’t those side seams look extra cute with a bit of bronze piping? So I tore it apart again.

Which wasn’t so bad, because I decided to put the trim in place before putting it back together so that I would only have to wrestle with one piece at a time.

The first stage of trimming involved figuring out the size and placement of the velveteen false turn-backs at the skirt front. I did this in the pretty non-scientific way of sketching a shape I sort of liked with a marking pencil onto the skirt front, and then cutting the velveteen to match, plus extra for hem allowance.

I had a slight crisis-of-faith after cutting the first one, and tried out a couple of other shape variations with fabric scraps before deciding that I did like the first one best after all.

I folded the edge under, and backed the edge with an offset piece of the bronze taffeta for extra contrast against the main skirt body, then set these pieces aside to attach later. 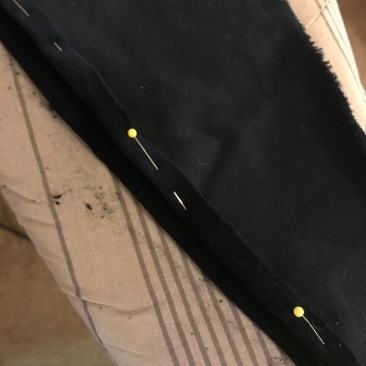 The rest of the overskirt decorations are the same as the underskirt, so I will only go through them quickly.

Binding the hems of what will become the pleated ruffle:

Piping and attaching a strip of blue taffeta to cover the raw edges of the pleats and appliqués. 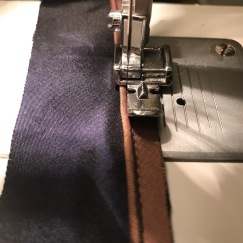 And then I attached the false turn-backs. I stitched along the edge of the velveteen, through all layers, so that the edge of the bronze isn’t held flat against the skirt. 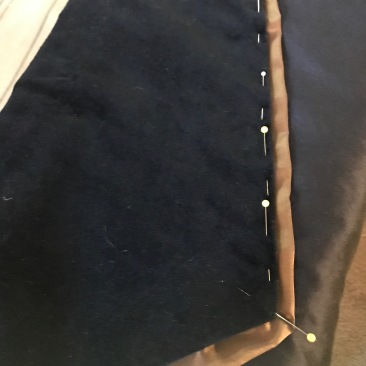 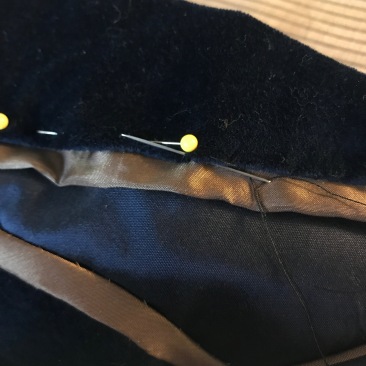 The velveteen is hemmed to the inside of the front edges several inches in in the hopes that it will provide some weight to keep the skirt from flying open when I walk, and to provide a bit of coverage over the white organdy if it does.

The piping on the side seams extends past the seam and all the way down the edge of the back piece. The swallowtail at the lower half of the back is finished with a backing of blue taffeta to make sure the white organdy lining doesn’t show. 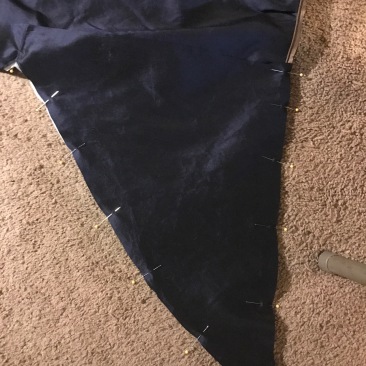 The inner edges of the swallowtail got a row of pleats, and one of the blue bands to finish the pleat tops, but no velvet appliqués.

Gathering in the back and stitching the waistband in place: 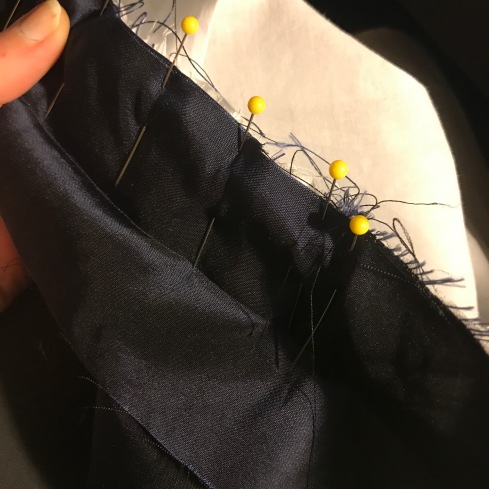 This waistband was out to get me. First a thread broke about a third of the way through. Then I ran out of bobbin thread another five inches after that. Then when I got to the end, I realized that the gathers hadn’t made it into the seam in two places, and had to go back and open it up to get the raw edges back inside the waistband. It was a lot of drama.

The final step was to put it on the dress-form, play around with the bustle area, and tack the polonaise in place when I liked how it looked! 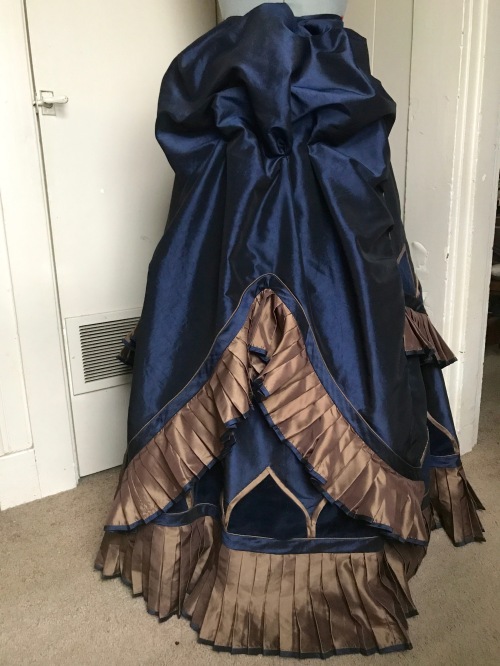 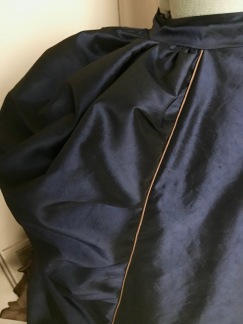 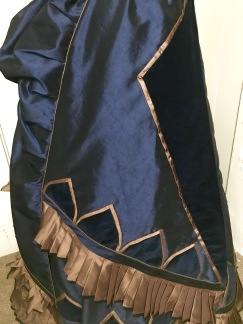 I feel like this has taken me for-absolutely-ever (not the six month break, just building it took waaaay longer than I had anticipated). Hopefully the bodice will be a bit friendlier. I can’t wait to see what it all looks like together, though! Wish me luck!