There’s nothing like a time crunch to make me productive. This time around, it was the crunch leading up to author Sarah Vowell’s visit to Locust Grove, where the interpreters were appearing in the 1820s to celebrate General Lafayette’s tour of the United States.

I was already well supplied with an elegant 1820s gown, but Brandon was in desperate need of a civilian coat, since his character, Dr. John Croghan, was acting as host for the evening.

By the time we got back from a lovely vacation back home in Northern MI, I only had ten days left to make the jacket.

The first parts of jacket tailoring are my favorites: my love of precise handsewing means padstitching is right up my alley. I find it so satisfying to watch the fold and curve of a collar or lapel becoming more defined the more you stitch. 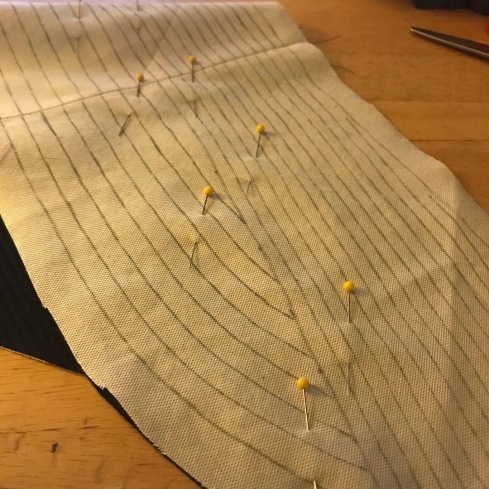 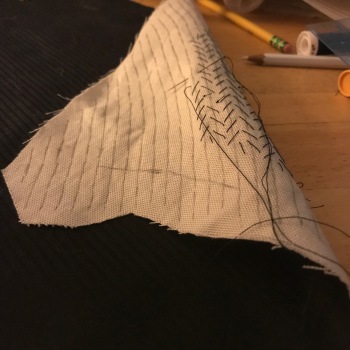 Padstitching is followed by another favorite of mine–catchstitching, which is an (ideally) invisible way to attach non-padstitched areas of the interfacing to the fabric, while still allowing a bit of flexibility to the piece. 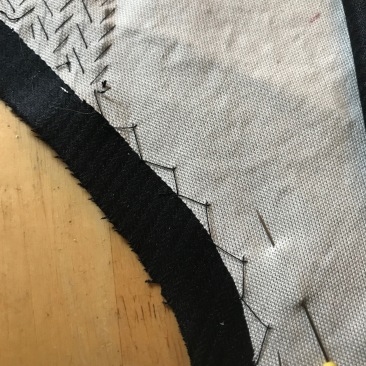 The trick to catchstitching is not to pull things too tight. The purpose of the stitch is not to nail the interfacing in place, only to prevent it from folding up inside the coat. It’s much better to leave things a little loose than to pull your stitches too tight and pucker the outer fabric. I usually try to leave a sliver of daylight between the thread and the interfacing, just so I know for sure that I haven’t messed things up.

The lovely thing about jackets of the early Romantic era, as opposed to the Regency, is the existence of a waist seam. The decorative pocket flaps on this coat just get basted onto the tail piece, and the raw edges are hidden away in the seam. It also allows for some much needed waist shaping that doesn’t exist in earlier cuts. Amusingly, since they are false flaps (i.e. there are no pockets inside of them), you then baste through the tails and the bottom layer of the flap to ensure your decorative flaps stay perfectly placed and never actually, you know, flap.

I also want to take this moment to shout out Renaissance Fabrics–this herringbone striped wool is so gorgeous. That sheen you can see in the light is in no way exaggerated by the photos, it has an almost satiny finish. Extremely elegant! 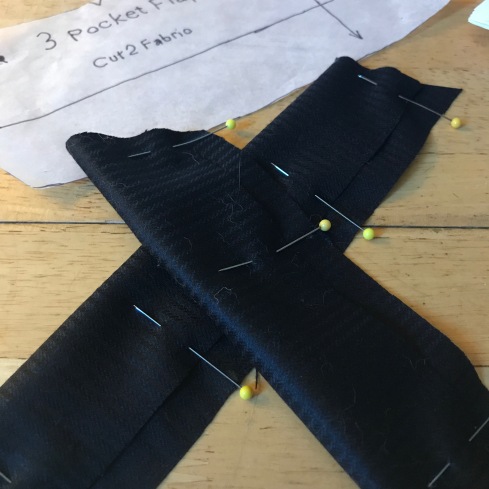 The pockets themselves have nothing to do with the flaps. Their openings are hidden in the seam between the back and tail pieces, which itself is hidden inside of a decorative pleat. 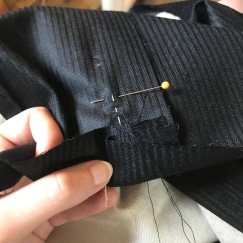 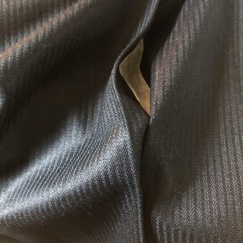 On the Saturday before the event the next Friday, Brandon helped me out by jumping on his 1898 Wheeler & Wilson treadle machine to construct the sleeves and sleeve linings while I worked on the tails and the front facings. 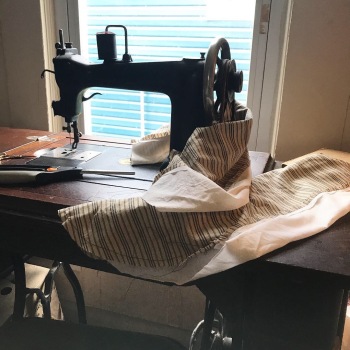 These photos show the tail overlap in the center back from the inside and outside before I put in the tail facings, which I apparently forgot to photograph. That’s what happens when you’re steaming though a project! 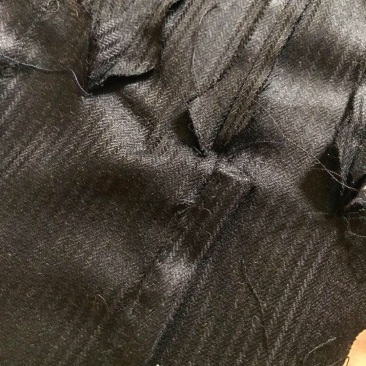 In order to help it keeps it’s shape, a jacket like this gets two layers of front interfacing: one inside the actual front piece, and one in the front facing (the piece of matching fabric that is sewn in the inside of the front so that it can come around and make the outside of the lapel.) In this case the front facing lines most of the front, and comes all the way around to help stabilize the upper back as well.

Although it was not called for in the pattern, I supplemented the chest area facing interfacing with two layers of cotton batting to help facilitate the “pigeon-breast” shape that was fashionable for men in the Romantic era. Basically, the more you can get your torso to be shaped like a cone, the better. Some men even wore corsets to help create the large-chested, small-waisted shape. 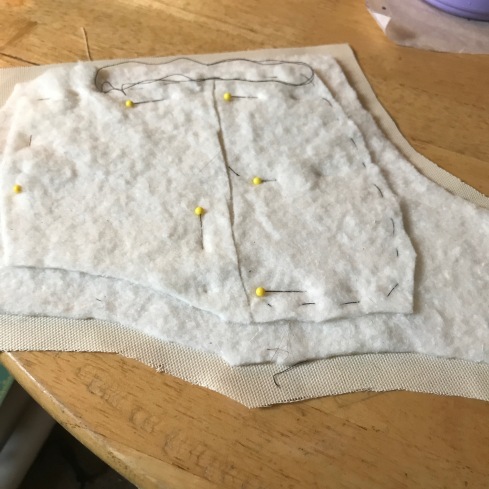 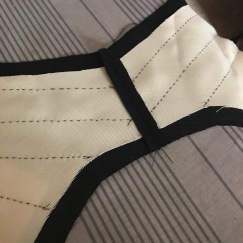 Since Brandon made the sleeves, I don’t have a lot of photos of the process, but rest assured that they did go in, and get lined! Due to the fashionable shape, the sleeves also have a good bit of gathering and poof at the top to help add to the wide-chested illusion.

The final hurdle on Thursday night were buttons and buttonholes. Luckily, I only needed to make 3 functioning buttonholes. Since we were using brass shank buttons, I tried out a technique I’ve never actually used before, but definitely like. You poke holes with an awl where the buttons need to go, put the shanks through the holes, and pass something (tape, ribbon, in my case yarn because it was all I had that fit through the tiny shanks) though the shanks on the wrong side of the fabric. Then you stitch your tape down to the fabric, and that holds the buttons in place, and keeps them from flopping around as much as they would if you just sewed them to the front of the coat. It’s a technique I’ll certainly employ in the future. 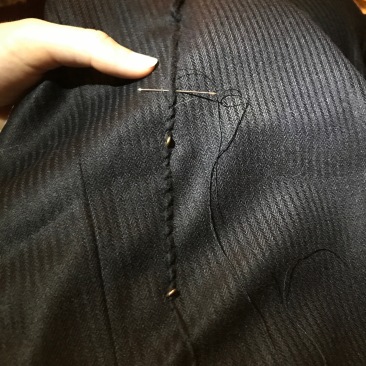 And that was it! I even got done in time to finish hemming a white cravat that I’ve had in my workbasket forever.

Here’s the finished look, I think he looks pretty sharp! 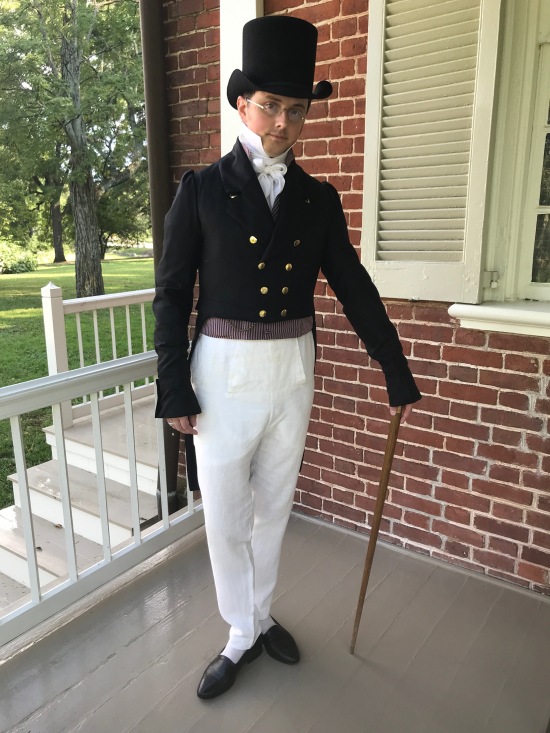